As the penetration of photovoltaic power in the electrical grid increases, reliable forecasts of solar irradiance are becoming ever more critical. For forecasting horizons beyond a few hours and up to several days, Numerical Weather Prediction models (NWP) is stapled to yield the best results. In addition, downscaling global ones with mesoscale models such as the Weather Research and Forecasting model (WRF) often outperform, in particular in the tropics1.

WRF can be configured in many ways: users must choose among a large palette of modules to emulate radiative transfer (RTM), planetary boundary layer (PBL), micro-physics (MP), sub-grid cumulus clouds (CU), etc. In fact, choosing a configuration that best forecasts solar irradiance in a specific region can be challenging. Several works have evaluated the systematic impact of WRF configurations on solar forecasting, but since these studies are restricted to one or two types of modules, they do not allow a thorough comparison between different types of modules.

In this work, we simultaneously evaluate the impact on irradiance forecasting of five types of modules for Singapore. To best exploit the results of this experiment, we propose an original validation approach, notably based on Taylor diagrams and ANOVA.

A total of 108 configurations of WRF, using different models for CU, RTM, MP, and PBL modules, were run on Singapore National Supercomputer (NSCC) for the year 2016. All of them use 9 km and 3 km nested domains centered on Singapore. Initial and boundary conditions are provided by the global forecast system (GFS).

The following figure shows the TD for the 108 WRF configurations. The black dashed line shows the standard deviation of the reference. 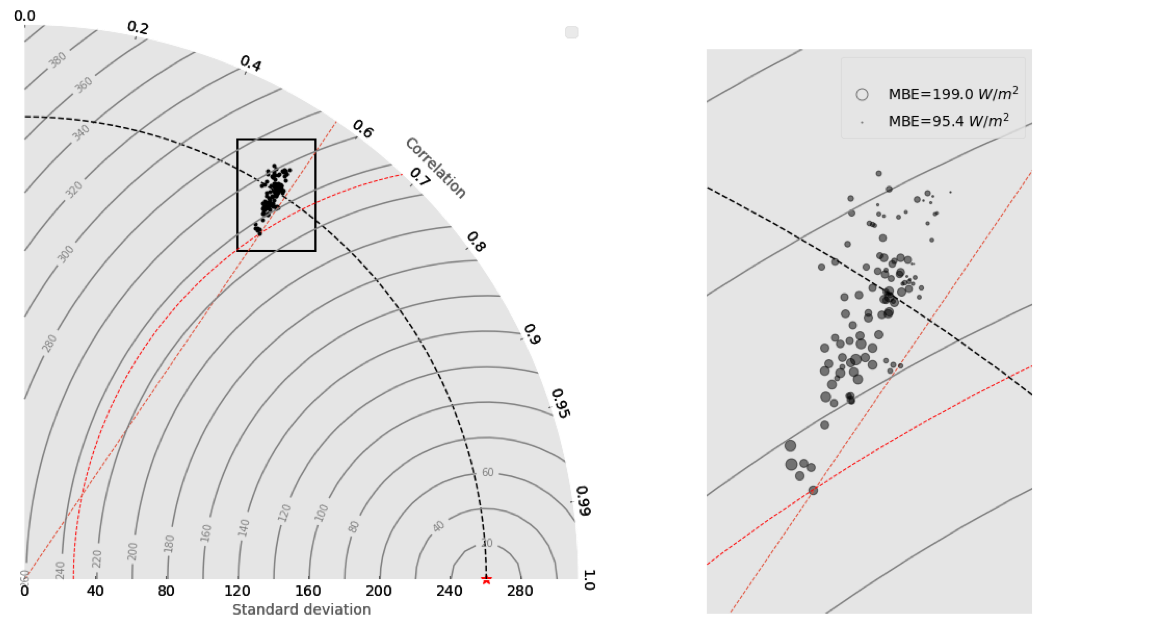 Different WRF configurations not only have an impact on the precision of the forecasts, but also on their standard deviation, i.e. their plausibility.

To determine which module impacts each property most, an analysis of variance (ANOVA) is conducted. We found that CU has the most impact on precision, followed by MP and RTM. This latter also influences plausibility and bias the most. PBL, on the other hand, only somewhat impacts the bias.

The analysis of 108 configurations of WRF with TD has shown that WRF parameterization not only impacts the precision of WRF forecasts but also their plausibility. In addition, ANOVA suggests that RTM, MP, and CU are more important for solar forecasting in the tropics than PBL.