Oceanic surface waves are an important component of the offshore wind energy environment. Being the interface between the atmosphere and the ocean, they directly affect heat and momentum fluxes between the two spheres, thereby impacting the local and regional climate as well as aquatic life. Wind farm wakes of offshore wind farms influence the local wave field due to the changed local wind field. Due to the bi-directional relationship between waves and wind, waves also affect the local wind field and thus the power production in neighboring wind farms. Therefore, there is a need for a better understanding of the impacts of wind farms on waves and vice versa. Thus, in this study we investigate, how strongly wind farms impact waves and how far this impact reaches.

To achieve the goal of this study mesoscale numerical model simulations are carried out with a fully coupled ocean-wave-atmosphere modeling system, which is part of the Coupled-Ocean-Atmosphere-Wave-Sediment Transport modeling system (COAWST, Warner et al. 2008, 2010). In this study, we use the Weather and Researching Forecast model (WRF, Skamarock et al. 2008), the Simulating WAves Nearshore model (SWAN, Booij et al 1999) and the Regional Ocean Modeling System (ROMS, Shchepetkin and McWilliams 2005). To link SWAN and WRF we apply the Wave Boundary Layer Model (WBLM, Du et al. 2017, 2018) to ensure that the momentum fluxes to and from the wave model are consistent in both models. To calculate the effect of wind farm wakes, two parameterisations are used: the Explicit Wake Parameterisation (EWP, Volker 2014) and the WRF Wind Farm Scheme (WRF-WF, Fitch 2012). By using both parameterisations, a range of possible impacts can be determined.

The coupled modeling system is applied to the offshore area to the west of Jutland with the wind farms of HornsRev 1, 2, 3, DanTysk and Sandbank. For this area wind and wave measurements are available from FINO 3 as well as measurements from DanTysk and Sandbank, which can be used for validation. To determine the interactions of wind farm wakes and waves, simulations of different complexity are performed: WRF-ROMS-WAKE (EWP, WF), WRF-SWAN-ROMS, WRF-SWAN-ROMS-WAKE (EWP, WF). Differences between those simulations are used to detect the effect of wind farm wakes on waves (WRF-SWAN-ROMS – WRF-SWAN-ROMS-WAKE) and of waves on wakes (WRF-ROMS-WAKE – WRF-SWAN-ROMS-WAKE). From Synthetic Aperture Radar (SAR) data, meteorological conditions with strong wakes are identified. Starting from those cases, the large scale atmospheric stability as well as the large scale wave field is varied to investigate, how those characteristics affect the impact of wind farm wakes on waves and air-sea fluxes. Based on the results, in this presentation implications of the importance of waves for offshore wind resource modeling are indicated. 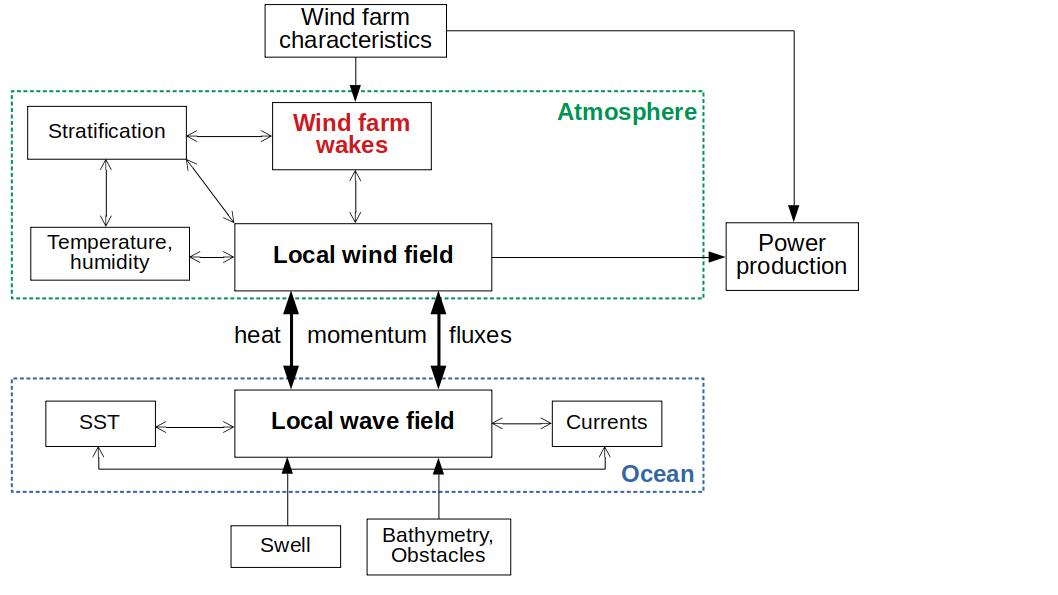 Figure 1: Conceptual model of the offshore wind-wave-wake system. Note that only the most important processes have been included and that air-sea fluxes depend also on the state of the other properties of the atmosphere and ocean.