Reliable solar forecasts are needed to increase the penetration of solar power into the electricity grid.

In the realm of solar forecasting, most of the works have been devoted to deterministic or point forecasts. However, an estimation of the uncertainty associated with the forecast allows reducing balancing needs (e.g. energy storages), may help the grid operator in his decision-making process and, as a consequence, reduces the operation costs.

In this work, probabilistic day-ahead solar forecasts are generated by an ensemble prediction system (EPS). However, these ensemble methods are well-known to exhibit a low reliability resulting from lack of spread of the members of the EPS.  Calibration methods have been proposed to tackle this problem. In particular, Ben Bouallegue proposed a method to calibrate solar forecasts produced by the COSMO-DE ensemble prediction in Germany  .  To the best of our knowledge, no works attempt to evaluate calibration methods in an insular context.

The objective of this work is therefore to compare the efficiency of three calibration methods in an insular context.

Day-ahead ensemble forecasts are provided by the Integrated Forecasting System (IFS)  of  the  European  Centre  of  Medium-Range  Weather  Forecasts  (ECMWF) . The ensemble is composed of 50 perturbed members.  The temporal resolution is 3 hours and the spatial resolution is of 0.2° in both longitude and latitude. Forecasts are evaluated against  in-situ observation data collected on  the site of Saint-Pierre in the south of Reunion island.  One year of data (2012) is used to calibrate the models and another one (2013) is used to carry out a comprehensive testing procedure.

Rank histogram and the CRPS (Continuous Ranked Probability Score) with its decomposition into reliability, resolution and uncertainty are used to assess the quality and the skills of the different models. CRPS is a commonly used score for evaluating the overall skill of a probabilistic method.  The decomposition proposed here will allow evaluating the impact of the calibration methods on the reliability and resolution components.

The performance of the calibrated models are evaluated against the original (raw) ensemble forecast. 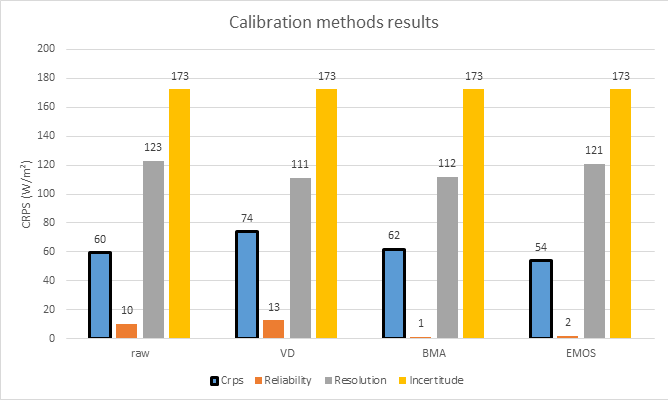 As shown by the figure above, EMOS and BMA methods improve the reliability of the forecasts albeit the overall quality of BMA is slightly worse than the original raw ensemble i.e. CRPS BMA > CRPS Raw.

For the case under study, it appears that EMOS is the best option while the VD method should be discarded. Nonetheless, in comparison with the raw ensemble, the improvement brought by the methods may appear marginal.