Accurate wind power forecasts are required on a range of spatial and temporal scales for both electricity market participation and power system operation. In most cases it is valuable to consider the spatial dependency of generation and/or forecast errors. For example, spatial methods for very short-term forecasting using vector autoregressive (VAR) models and similar approaches outperform non-spatial methods, and modelling spatial dependence is critical in producing short-term scenario or trajectory forecasts and aggregating probabilistic forecasts in general. However, typically these spatial dependency structures are assumed to be static (unchanging in time) or slowly evolving despite it being known that the mechanisms underpinning spatial structure, such as the wind direction field or weather regime, can change rapidly. Here we present recent findings on the use of atmospheric regimes to condition spatio-temporal forecasting models for wind power forecasting.

In order to explicitly condition spatial models on atmospheric regimes we first identify such regimes from gridded numerical weather predictions (NWP) using unsupervised learning (clustering) techniques including self-organising maps (SOM) and k-means. These regimes may then be used as explanatory variables in spatial models.

Second, we extend the VAR framework to include discrete weather regimes. Two approaches are considered: including dummy variables for each regime (essentially bias correction by regime) and conditioning the parameter matrix on the weather regime. Both add little in the way of computational complexity as VAR models or modest order (up to 10s of locations) are simple to estimate. The proposed methodology can be easily scaled using sparse/regularised modelling frameworks.

This method is tested in case studies on wind speed and power in the UK with regimes identified using the MERRA-2 dataset. Multiple SOM configurations have been examined and a final arrangement of 21 regimes in a 7x3 hexagonal map was found to be optimal using the Davies-Bouldin index, which minimises the “similarity” between regimes. However, further analysis found that further grouping the regimes into three “atmospheric modes” was optimal for very short-term wind speed forecasting. The centroids of these regimes are illustrated in Figure 1. The VAR model with parameters conditional on weather regime was found to provide consistent improvement of up to 4% for 1-hour-ahead prediction compared to both the benchmark (with no atmospheric regimes) and the VAR with dummy variables for each regime[1]. 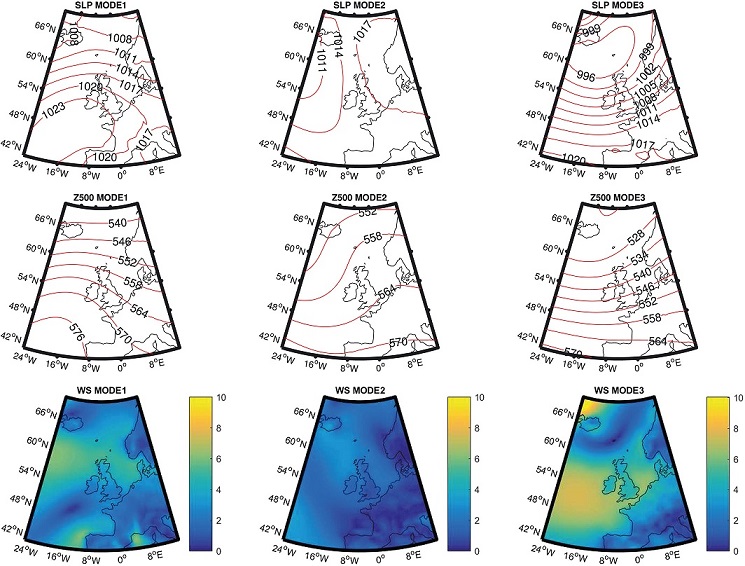 The role of large-scale meteorological phenomena in predictability is observed empirically but is not usually exploited in time-series models for very short-term forecasting, or in NWP post-processing and error dependency models. We have presented a simple extension to VAR spatio-temporal time series models in order to demonstrate the potential for improvement when atmospheric regimes are considered. One could imagine many other ways of incorporating similar information into the wide range of statistical models used in energy forecasting and beyond.