As ever more solar photovoltaic (PV) plants are installed and connected to the electricity grid, the share of electricity produced by solar plants increases, at times nearing levels of up to 50% of total electricity consumption in e.g. Italy, California and Germany. With such high levels of production, it becomes increasingly important to assess the expected production in advance with the highest achievable accuracy.

Traditionally, solar production forecasts are derived from Numerical Weather Predictions (NWP). An alternative prediction method is provided by persistence or time-series models. It is known that NWP models trained against historical data provide state-of-the-art forecasts for horizons of 6 hours or longer [1]. However, for very short-term forecast horizons, NWP forecasts are outbeaten by persistency and time-series models.

Time-series models effectively extrapolate the latest measurement data in the near future. A prerequisite of such forecasts is the availability of (near) real-time measurements. In case measurements cannot be obtained in real-time, one could use near real-time satellite-based irradiance data as a substitute.

In this work, we investigate the combination of a trained NWP solar forecast with time-series modelling of satellite-based irradiance data in order to obtain the best of both worlds for any horizon.

Time-series modelling of solar irradiance data has its own challenges, most notable the daily and yearly seasonality and the heteroskedastic nature. Different approaches are investigated to address these properties, such as transformation and weighting of the data as well as seasonal time-series models. The combination of several of these result in a forecast with a state-of-the-art accuracy for all horizons.

Below figure shows the evaluation of the Mean Absolute Error (W/m²) of the predicted solar irradiance as a function of the forecast horizon for several step-wise improved versions of the method and compares it with a NWP forecast trained with Ordinary Least Squares (OLS) regression. A substantial improvement of the accuracy is obtained for horizons up till (and including) 6 hours, which is even more than reported in literature. During the presentation, we will show results from a validation against measurement data from multiple Western-European meteo sites for the year 2018. 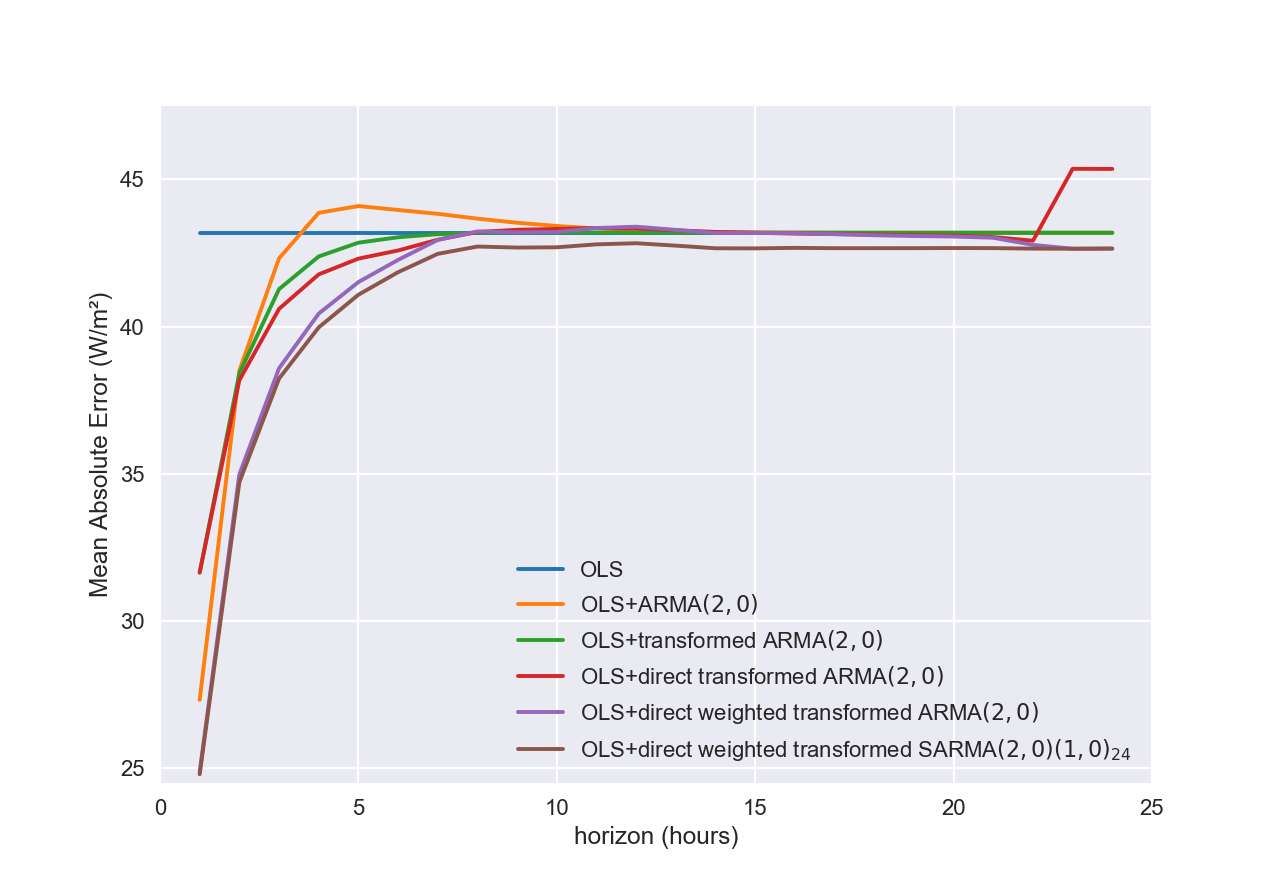