An assessment of surface shortwave radiation in South Africa (677)

South Africa has a favourable solar energy resource, receiving 2500 hours of sunshine per year, with direct solar radiation ranging between 4.5 and 6.5 kWh/m2. This makes it globally competitive to produce solar energy (Singh, et al., 2017). As the South African Department of Energy aims to achieve 40% of total electricity production from renewable sources by 2030, it is of particular importance to understand its vulnerability to weather and climate.

The South African Weather Service (SAWS) and the Met Office have an ongoing partnership under the UK government Newton Fund, underpinned by use of the Unified Model (UM) for weather forecasting. Focusing on weather applications for the Energy sector, this study provides the first comprehensive assessment of surface shortwave radiation forecasts in South Africa. We demonstrate SAWS’s numerical weather prediction (NWP) model capability to forecast surface shortwave radiation, and discuss how different cloud regimes influence the accuracy of those predictions based on (VanWeverberg, et al., 2015).

Forecasts of direct and diffuse surface shortwave radiation are produced by two high-resolution configurations of the SAWS NWP model over South Africa: SA1.5 and SA4, respectively at 1.5km and 4km horizontal resolutions. A site-specific post-processing system interpolating the gridded output onto individual locations has been running routinely since 2017.

As radiation errors are likely to be due to errors in cloud forecast, we are currently investigating error distribution over different cloud regimes.

Figure 1 depicts similar results for SA1.5 and SA4 configurations over all sites.

Diurnal cycles show a mean negative bias in the morning, shifting signal in the afternoon. Radiation values were normalised by the top-of-atmosphere radiation to obtain transparency factors (not shown). These reveal large mean biases predominant at dawn and dusk, mainly in the diffuse component. On other occasions during the day, direct horizontal irradiance (DHI) is on average more biased. This suggests that GHI tends to be under-predicted at sunrise and sunset due to the DIF contribution, and that during the day errors likely due to cloud forecast are smaller in DIF than DHI.

Monthly results show that mean errors tend to be larger in the Summer than Winter. Differences between seasons subside when normalised, namely between DIF and DHI. This means the SA model is equally skilful in predicting any radiation component for any particular month. 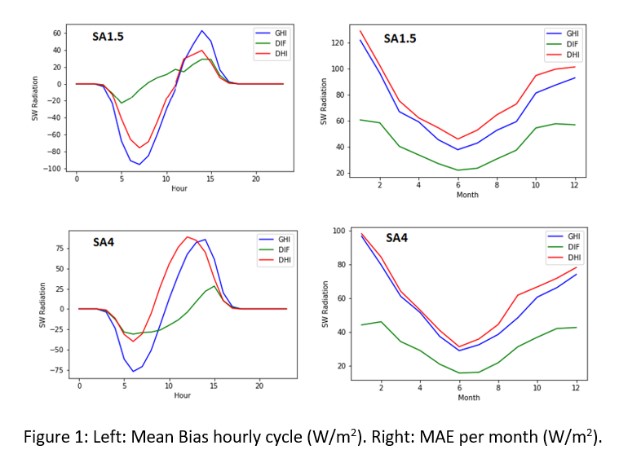 Results so far show that the South African Weather Service high-resolution NWP models are skilful in predicting surface shortwave radiation across a range of regimes. Overall this demonstrates the capability to support the Energy sector in South Africa through improved meteorological services.

Further investigation is underway to identify the role of clouds in the error distribution of solar radiation forecasts.