During the past few years, there has been major progress in the utilization of renewable energy sources (RES) to produce electricity. Among RES, solar energy has become a promising alternative source due to its advantages [1]. Photovoltaic (PV) technology has grown at impressive rates over the past decade and it has led to the development of large-scale grid connected PV power plants contributing sensibly to the national energy portfolio. However, solar power production is highly variable due to its dependence on local weather conditions. Such unstable power production can cause control and operation issues for users and administrators of electricity grids, as they would have to deal frequently with sudden surpluses or drops in power production [2,3]. Furthermore, a proper forecast is critical for grid operators, as they would be able to lower the number of units in hot standby and consequently, reduce the operation costs. Thus, the ability of precisely forecasting the energy production by PV systems is of great importance [4].

In our research, we focus our attention on solar power prediction without using any meteorological data or specialized equipment such as all-sky cameras. The main feature of our proposed methodology is that predictions can be derived only from the electricity production of PV power systems. The main objective of the current study is, as a first step, to investigate whether ‘clear-sky’ PV production can be calculated using PV historical data.

The first step in our methodology included the collection of PV power output data from a PV station in Nicosia, Cyprus. Data (date, time and instantaneous kW production) was obtained every 15 minutes for 3 years and then, analysed for each month separately. The ‘clear-sky’ data was calculated by analysing the data of each day, where days with large fluctuations in energy production were removed from the data set. Moreover, various methods were applied to each data set in order to exclude the days with large fluctuations and therefore, calculate the ‘clear-sky’ data without any ‘human’ intervention. The methods used include the characteristics of a curve (skewness, kurtosis), tests for normality (Kolmogorov-Smirnov, Shapiro-Wilk) and the boxplot method. The results from all the methods were compared with the ‘clear-sky’ data for validation purposes. 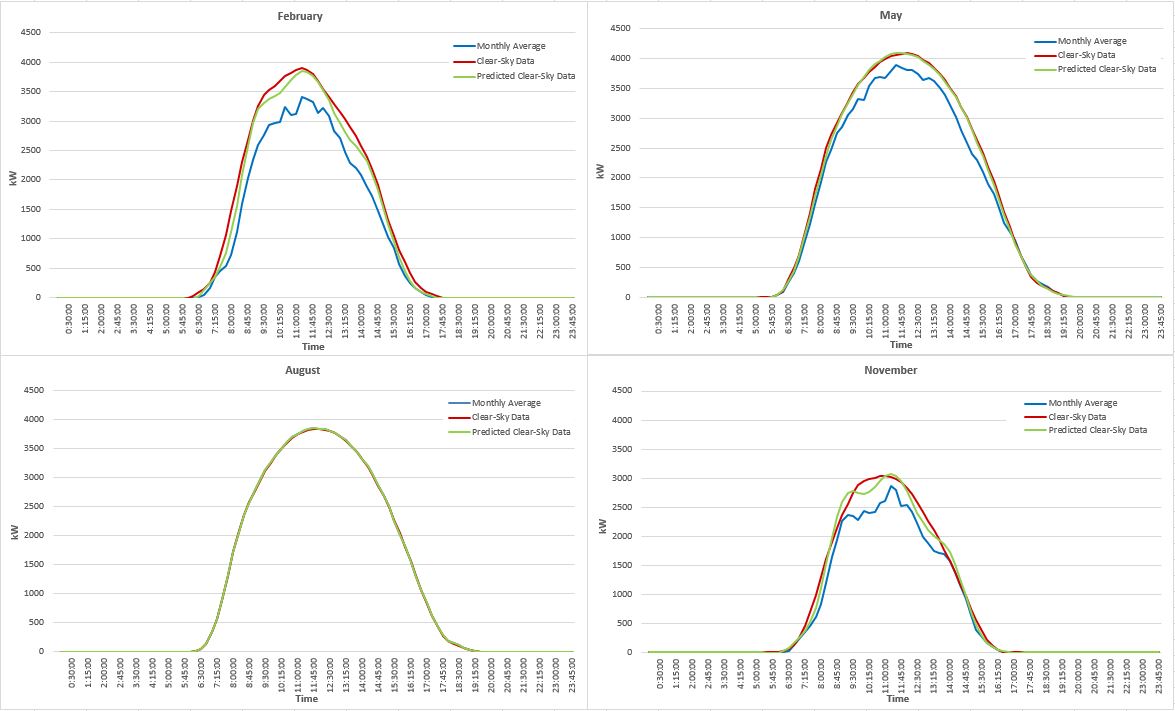 In this work, a simple method using historical data from PV electricity production has been developed to obtain the ‘clear-sky’ data. It is noteworthy that the proposed methodology does not need any additional information from PV power plants such as orientation, tilt, peak etc. Our future work includes the development of a model for precise forecasts of solar energy production, since several authorities already use solar power forecasting technologies in their daily operations.