To support energy network managers during extreme winter meteorological events, Météo-France has developed a decision support system (DSS), named WInter Risk for Energy (WIRE, Bouilloud et al., 2017), enabling the end-users to be alerted in case of threat for their infrastructures. The meteorological inputs are forecasts produced by the kilometer-scale atmospheric model AROME (Seity et al., 2011) in its ensemble version, AROME-ENS (Bouttier et al., 2012, 2016). Among other relevant parameters for transmission and distribution operators such as ice and snow accretion on power lines, the impact of high wind speeds during winter storms needs to be evaluated.

Instead of tuning alert thresholds for each different end-user, return periods may be considered as an understandable index of harmfulness of an event. Indeed, from their own past experience and because power lines and other structures are built to be safe under certain external conditions based on return levels, operators are usually used to dealing with them.

As a first step, the statistical model performing the conversion of the hourly gust at each grid point to the corresponding return period is computed with the Peak Over Threshold method (POT, Pickands, 1975). Several learning datasets are tested in this study. One of them is an 18-year archive of spatially distributed observations of daily gust over France. These gridded observations are built with regression-kriging of in-situ observations and some predictors from AROME and a topographic model. A second one is composed of high-resolution atmospheric model.

Return levels computed over gridded daily gusts appear similar to the reference return levels over in-situ observation as shown in Figure 1. The spatial distribution of return levels is coherent with the wind climatology in France: higher wind gusts over the coastlines, along the Rhone valley and over the mountains for a given return period.
Moreover, Figure 1 shows that the return levels obtained by the local method POT are relatively smooth. 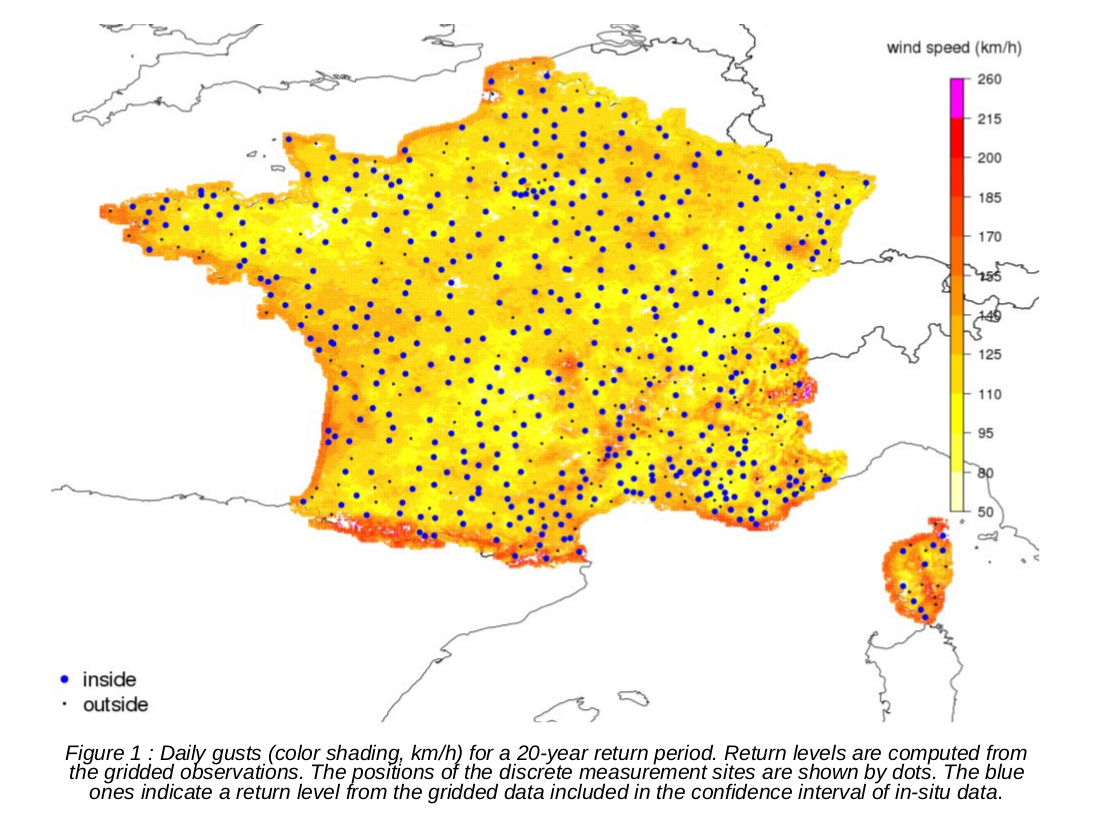 Innovative approaches such as approaches using long sequence time series from a particular climate model or a regional statistical model should be discussed to find the most robust results.

The assessment of extreme wind speeds at 100 m and their return periods could also be a great opportunity for the wind power sector.