The NSRDB is a publicly available database providing solar radiation covering a 20-year period from 1998-2017 at half-hourly 4kmx4km resolution [1]. This dataset covers longitudes 25° W to175° W and latitudes -20° S to 60° N. The NSRDB is widely used by academia, government and industry and has over 60,000 unique annual users. This database is used for solar modeling by popular energy modeling software such as the System Advisor Model (SAM), PVSyst and Plant Predict. Recently, NREL developed a new dataset that can provide spectral information at any tilt and orientation.

In this paper we present the development of the NSRDB, recent updates and a validation of the database using high-quality ground measurements.

The model used to generate the NSRDB is the Physical Solar Model (PSM). The PSM is a two-step model where the first step estimates cloud properties including cloud masking, cloud type, cloud optical depth and cloud particle size. In the second step the Fast All-sky Radiation Model for Solar Applications (FARMS) [2] is used to compute the Global Horizontal Irradiance (GHI), Direct Normal Irradiance (DNI) and Diffuse Horizontal Irradiance (DHI). The atmospheric inputs in FARMS are derived from the Modern-Era Retrospective analysis for Research and Applications version 2 (MERRA-2).

Spectral data from the NSRDB is an on-demand service that uses a newly developed fast spectral radiative transfer model called the FARMS- Narrowband Irradiance on Tilted surfaces (FARMS-NIT). This model provides the capability to compute spectral radiation and provides data at user chosen tilt and orientation.

Both the broadband and spectral datasets were validated using ground measurements.

The NSRDB provides a highly-accurate solar resource dataset that has been validated using surface radiation measurements. The NSRDB generated using PSM v3, the latest version of the model, is compared with results from PSM v2 the previous model version. PSM v3 contains significant improvements including the use of hourly aerosol datasets, timeseries surface albedo data and the inclusion of snow.

Figure 1 shows a comparison of the NSRDB against long-term data (1998-2015) from 7 SURFRAD ground measurements sites. Significant reduction in the uncertainty for hourly data is clearly demonstrated when compared to PSM v2.

The spectral datasets were compared to measurements at the NREL Solar Radiation Research Lab site for a clear day. The results were compared to measurements from a spectral radiometer operated on a single-axis tracker. The results show that the Mean Bias Error (%) (PE) is 0.62% while the Mean Absolute Bias Error (%) (MAPE) is 4.93%. For cloudy sky the results are compared with output from the LibRadtran model. The PE is -1.47% while the MAPE is 3.67%.

The NSRDB (https://nsrdb.nrel.gov ) provides 20 years of publicly accessible broadband and spectral data from 1998-2017. These datasets have been validated using ground measurements and are shown to be of high-accuracy. Future work includes the development and dissemination of 5 minute, 2km NSRDB data using the GOES-16 satellite. 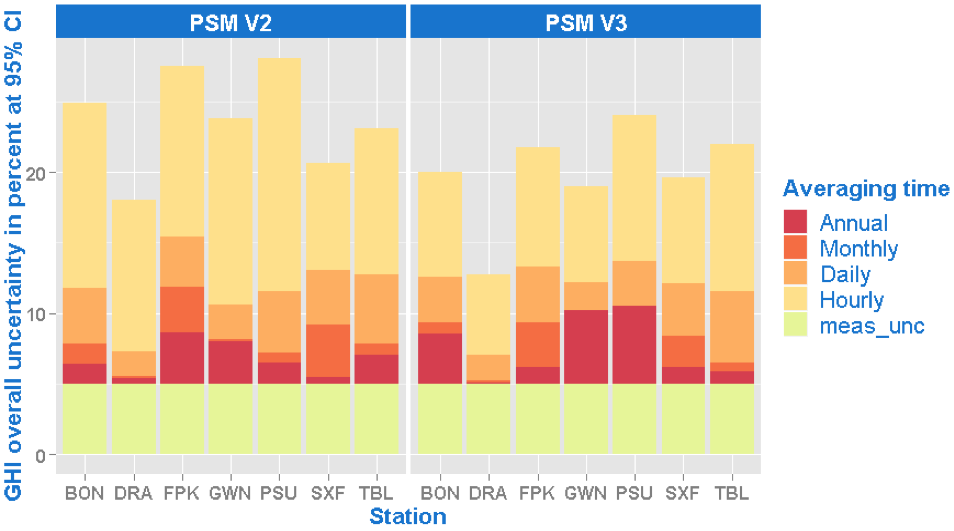