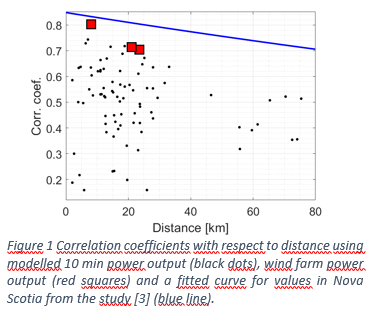 The Faroe Islands are group of 18 islands with complex topography formed by mountains with up to 800m, separated by partly narrow Fjords, and is extended ~80x100km at about  62⁰N and 7⁰W. The population of ~50.000 people gets electricity produced from a hybrid power system, combined of diesel generators, hydropower and wind power. The power production in 2018 was 352 GWh, where 48.8% came from renewable energy sources, including 18.1% wind power [1]. In the future, more wind production is planned, as a part of the aim of reaching a 100% renewable electrical energy system by the year 2030. For the design of the supply system, the characteristics of the fluctuations in the lumped power output of the wind farms as caused by wind field characteristics have to be known.

We will discuss some aspects of the wind conditions at this quite complex location, given by temporal and spatial characteristics of both, the wind field as registered by sets of meteorological towers, and a set of power output data from wind farms. Basically the dispersion of these fields on a 10min time scale are studied, here with special focus on the influence of the wind direction on the field parameters.

This study is based on various data sets. Power data for the year 2018 for all three wind farms currently located in the Faroe Islands. Wind measurements from three meteorological masts with heights 70-100m. Lastly, less quality wind data measured every 10min at 10m a.g.l. from wind monitoring stations installed for purposes of road condition monitoring. The 10m a.g.l. wind data is modelled to power data, assuming a logarithmic wind profile and a 0.9MW wind turbine at each site. Correlation coefficients between modelled power output, as well as wind farm power output is calculated.

This analysis will be extended for the analysis of subsets sorted by wind direction in view of developing a model describing the amplitude of the fluctuations in the generation of the combined wind farms in dependence of wind direction and magnitude. This model would also be helpful for the site selection for additional farms.